November 2016: The Necessity of Retreats 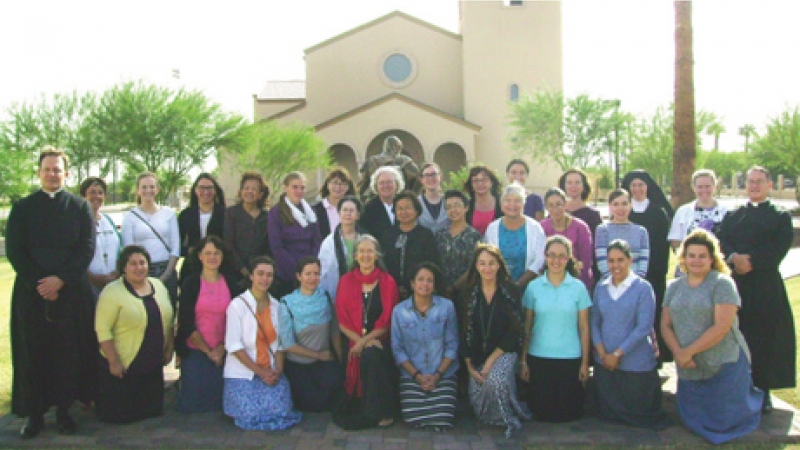 The SSPX in its retreats follows the legacy of Fr. Ludovic-Marie Barrielle

The leaves had barely fallen from the trees here in Kansas City when the frenzy of holiday shopping began. It seems that each year these materialistic cries of our modern culture become louder and more insistent. The clamor and noise of modern media and technology further attempt to drown out any still, small voice that might speak of eternal truths. With the wisdom of Christ, faithful Catholics must learn to quiet this din to hear the voice of God.

The problem is not only in the shopping malls and on the internet. Even modern churchmen contribute to the confusion by preaching a watered down, materialistic, ecumenical gospel that has little to do with the message of Our Lord. With such disorientation in our society and even in the modern church, how are we to learn to see clearly so that we might become a part of the solution?

The Spiritual Exercises of Saint Ignatius give a decisive answer to this diabolical disorientation. To burdened souls they provide a true look at reality: our creation and total dependence upon almighty God, the purpose of life, our duties towards Him, the correct understanding of God’s mercy, the consequences of our abuse of His mercy, and what it truly means to know, love, and serve Him. Pius XII commented that, “We could think that Saint Ignatius wrote [the Spiritual Exercises] especially for our own times.” They have not only been approved by the Church and by almost every pope since Paul III (in 1548), but they are the most recommended retreats not only for conversion but to help attain Christian perfection.

Although many of the faithful attending SSPX chapels are familiar with Ignatian retreats, not many know about their important role in the early years of the Society or the reasons they play such a large part in our apostolate. To understand this, we must explore the life of Fr. Ludovic-Marie Barrielle. Fr. Barrielle was probably the second most important figure in the founding of our seminary in Ecône and of the Society of St. Pius X as a whole. As a young parish priest of a large city parish in France during WWII, Fr. Barrielle was encouraged to attend the spiritual exercises with a Spanish priest named Fr. Vallet. There he was “hit over the head” with his second vocation: to abandon his beloved parish and enter as a novice into Fr. Vallet’s new Congregation for the purpose of giving the Ignatian Spiritual Exercises. In the spiritual exercises, Fr. Barrielle discovered the heaven-sent instrument to pull modern men out of their distracting whirl of activity and set them, by several days of serious prayer and penance, firmly on the road to saving their souls.

Fr. Barrielle spent many fruitful years spreading this precious spiritual treasure among French speaking Catholics. Yet the modernists who took over the Church in the wake of the Second Vatican Council could not tolerate the traditional Catholic Faith being so strongly conveyed by the old-fashioned method of Ignatius. Consequently, Fr. Vallet’s Congregation came under severe pressure to update (meaning to water down) the Ignatian exercises. Being unwilling to do this, Fr. Barrielle was relegated from the central retreat house of his order to a distant house in the north of France.

Around that same time, Archbishop Lefebvre founded the Priestly Society of St. Pius X and opened a seminary in the now-famous location of Ecône. While he had some young priests coming forward to help him form the young men at his new seminary, he was lacking an older, more experienced priest for their spiritual direction. Fr. Barrielle came to the aid of the Archbishop, dedicating himself to spiritual direction for the seminarians at Ecône, to preaching the Spiritual Exercises, and to teaching other, younger priests to do the same.

Fr. Barrielle was wholly convinced that it was God who had raised up Archbishop Lefebvre to defend the Faith, the Church, the Mass, and the priesthood and he strove zealously to impart this conviction to the seminarians. From 1971 to 1983, Father Barrielle spent an astonishing eleven years at Ecône, more fruitful than ever. He had been faithful to St. Ignatius, and now he was faithful to the Society of Saint Pius X. He died within the walls of the Ecône seminary on March 1, 1983, in his eighty-sixth year.

Knowing the emphasis placed on Ignatian retreats by Archbishop Lefebvre himself, the Society of Saint Pius X has always made a high priority of founding retreat houses and preaching retreats. In the diabolical disorientation of the age in which we live, it is common to be swept up in the noise and activity of modern culture. Consequently, we need this important tool of the Holy Ghost to bring souls to a place of peaceful retreat where the voice of God can be clearly heard.

You may wonder why, as a Catholic living in the world, occupied with the duties of your state in life, you should make time for a retreat. Aside from the benefits of the silence, both material and spiritual, a retreat is an opportunity for you to gain great graces from God. These are graces that are not available at any other time and are necessary to all souls, no matter what their current state. Souls established in virtue need renewing. Souls given to worldly pleasures need to return to God. Souls struggling with temptations need the grace of firmness and perseverance. Within the walls of a retreat house, you will find such treasures in abundance.

All souls of good-will gain great benefits from a retreat at least every two years. Where do you and others in your family stand in this regard? How long has it been since your last retreat? Is it possible you have never explored this rich fountain of graces? I say with great sincerity that now is the time.

To help you take this important step, I have included the schedules of all three US retreat houses on the enclosed flyer. Please post this by your calendar or stick it to your refrigerator and prayerfully consider which retreat will fit your schedule in 2017. If you already long for this time for reflection on the great truths of the Faith, the purpose of life and the means for reform of life, call or email one of the retreat houses listed on the back page of this letter to indicate your interest in an upcoming retreat. Finally, please return the enclosed reply card with a donation of $50, $100, or even more to help other souls benefit from the grace of a retreat in the coming year.

Our modern world is constantly chasing phantoms in a frenzied, yet futile, pursuit of happiness. At this time of year the noise can seem even louder than usual. Make a resolution this season to step back from the clamor for a while. Or give a gift to help our retreat houses provide this great treasure of peace to men of good-will.

Sincerely yours in Christ,

PS: Please consider making generous use of the tax benefits of year-end giving to make a real difference in the continuing work of Society of Saint Pius X retreat centers here in the United States.